Synthetic grass, also known as AstroTurf, is becoming increasingly popular. Initially a clunky product used for sports fields, it has become more functional and aesthetically pleasing, showing up in residential and commercial settings as traditional lawns have waned in popularity. But is it the right choice for your Pacific Northwest yard? 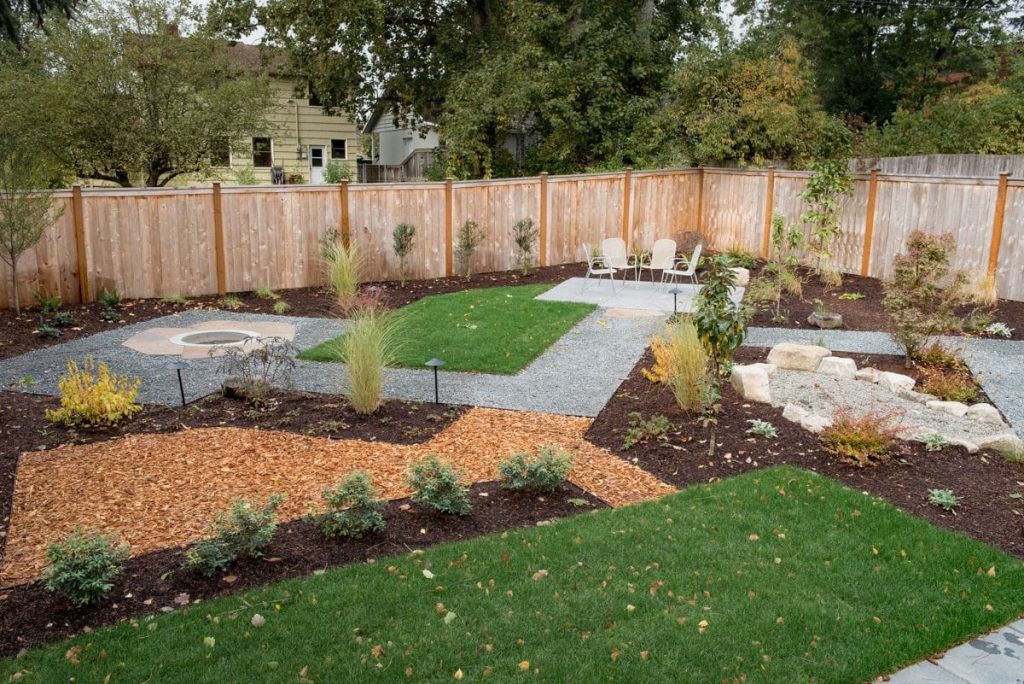 Why go with synthetic grass?

Since it is not alive, synthetic turf can be a more low-maintenance option than real grass. It stays green year-round without the need for problematic fertilizer or extra water use during dry months. This can come in handy in areas where natural grass would not flourish, such as shady areas of the yard.

When kids or dogs enter the equation, this can be a game changer. If organic turf gets torn up during the muddy winter months in the Northwest, it can take until spring to return. Artificial turf provides a dry playing surface year-round.

And with how far the technology has come, the turf available looks realistic and alive. Newer versions are also able to drain dog urine, which can harm real grass and plants.

What are the downsides?

The biggest issues inherent to synthetic grass are environmental. Despite its green color, it is generally produced from environmentally unfriendly petroleum. This means plastic turf has a carbon footprint that traditional grass does not.

While there are now turf products produced from recycled rubber or biomaterials, disposal is still a big issue. Most turf has a limited lifespan and is difficult to recycle – meaning it ends up in a landfill at best, and littering a natural area at worst.

Turf play fields have been a large source of controversy. While studies are inconclusive on their effects, rubber pieces used to infill turf have been found to contain toxic chemicals. Research also shows that synthetic turf leads to increased injuries for sports players.

There is also an impact on the environment. Studies have found that broken down rubber infill is a major source of microplastics in waterways. And as the turf itself breaks down it can also shed microplastics and other chemicals.

For these reasons, many are moving away from rubber infill to cork and other alternatives. Our preference is for sand, which is non-toxic and has minimal impact if washed away.

It’s worth noting that replacing the infill requires regular maintenance. While synthetic turf doesn’t need to be watered like regular grass, infill needs to be applied, compacted spots need to be raked out, and areas contaminated with animal poop need to be disinfected.

There are other potential issues, too, including that artificial turf heats up during the summer and, of course, doesn’t offer the same natural environment and biodiversity that real greenery does.

Artificial turf can be a controversial subject. Some homeowners associations have banned it for aesthetic reasons and the City of Boston has banned installing new turf fields due to concerns about chemicals in the grass.

On the consumer side, The New York Time’s Wirecutter project, which usually recommends the best version of different products, actually recommended against installing artificial turf, citing the short lifespan and environmental impact.

While the turf industry promotes it as a water-conscious choice, water districts have refused to endorse it as a water-saving alternative to grass for environmental reasons.

Here at Pacifica Landscapes, we value environmentally friendly lasting design. For that reason, we prefer to use real grass whenever possible.

That being said, while ongoing research points to potential issues with the chemicals in artificial turf, it can be the perfect solution for certain shady or high-use spaces in your yard where grass would have no chance, and where hardscapes or planting beds would not provide usable play space.

Whatever your situation, we’re happy to work with you to figure out the right choice for your Seattle yard and install it. Give us a call at 206-551-9872 for a free consultation!